This week, as part of our Cultural Enrichment Activities our Global BBA students had the chance to discover Ikebana under the teaching of Kondo-sensei. 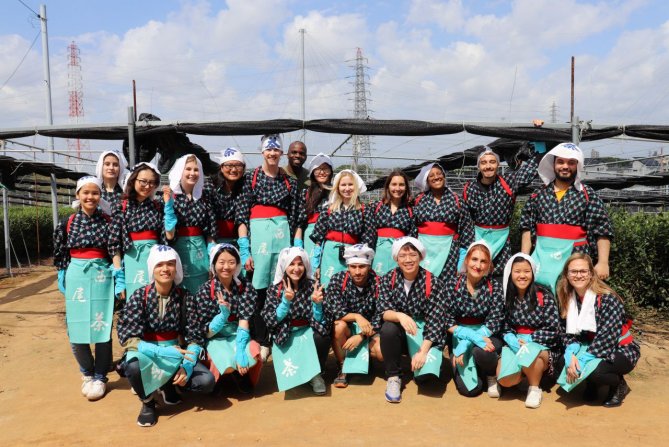 Matcha is one of Japan best known culinary specialty. This thin tea powder, whose preparation is as special as its cultivation, is an integral part of traditional Japanese culture. Indeed, it is the tea used in the traditional tea ceremony (sado), one of the three classical Japanese arts of refinement. But matcha has found an identity of its own beyond traditional Japan.

On Sunday the 19th of May, NUCB students had the chance of discovering more about matcha and Japan culinary refinement. The day started around gastronomy. Students were able to enjoy high-quality traditional food in a typically Japanese environment. The lunch included a small matcha rolled cake.

The student then visited a Japanese garden before departing for the tea fields. There, they took part in the tea picking taking place under the shade which is an essential element for the quality, nutrition, and flavor of the resulting Matcha. An initiation to the traditional Japanese garb for tea picking was also organized.

After discovering the “field” part of matcha production the students went to the Aya company where they learned how to turn the tea leaves in actual powder matcha. The visit concluded on a tea degustation.

The day ended on a shopping session in which, armed with their brand-new knowledge on matcha, students were able to pick the tea and the snacks that best fitted their personal taste.